One of the most fascinating aspects of drug addiction in the US is the synergy of geopolitical and domestic forces, and how they feed off of each other in often unseen ways.

For example, as explored in many major media outlets including the New York Times, the Washington Post, and the Los Angeles Times, and confirmed by the latest DEA heroin threat assessment, Mexico has become a major player in funneling heroin supplies to non-urban areas that have historically been exempt from easy heroin access, unseating Southeast Asia as the main supplier of heroin — higher-quality, at that, according to the Times — to the US.

And as US policy and law have cracked down on prescription opiates, heroin has become the de facto drug of choice for addicts who, whether consciously or not, find themselves dependent on opiates to stave off sickness.

In response, demand for heroin has surged and, as the Times notes, savvy cartels in Mexico with fingers on the pulse of American addicts have adapted their business models. 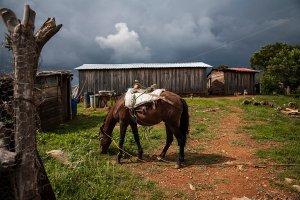 The home of a farmer in Calvario who leases his land for opium cultivation. (Rodrigo Cruz for The New York Times)

In an Aug. 29, 2015, Times article, we see fleshed out how this dynamic works in El Calvario, Mexico, a rural community nestled in the mountains of Sierra Madre de Sun in the most violent Mexican state, Guerrero.

“The cartels have a pretty good handle on the appetite in the U.S.,” said Jack Riley, the deputy administrator of the Drug Enforcement Administration. “They understand the prescription drug issue here, and that is one of the major reasons why you are seeing the expansion of poppy production.”

The article focuses on how a lack of opportunities and harsh poppy cultivating habitats contribute to luring children (or, more specifically, teens if the article’s sources are indicative of the larger under-18 poppy-farming population) into farming.

The steep grade and loamy earth make standing upright difficult, and on occasion adults tumble down the hillside and are injured, villagers say. That is where the children come in: Their slightness is an advantage come harvest time.

The children do not seem to mind. Several said opium was like any other crop they might be told to farm for their parents. Only it pays better.

The article points to loosening marijuana laws in the US driving down demand for farmers’ output of the crop, thus forcing them to consider other alternatives to make ends meet in a place with too few economic opportunities. This dynamic was also explored in an April 2014 Washington Post article:

The surge of cheap heroin spreading in $4 hits across rural America can be traced back to the remote valleys of the northern Sierra Madre.

With the wholesale price of marijuana falling — driven in part by decriminalization in sections of the United States — Mexican drug farmers are turning away from cannabis and filling their fields with opium poppies.

The Times article also hints at narco violence and its influence on government. In the Calvario area, the Sinaloa cartel rules, according to the Times. As one farmer said, “There is no real order here. We are governed by narcos.”

What’s clear from the article is that the link between poppy production and Americans’ heroin habits is lost on many of the small-time farmers who have other, legal crops that carry them through the rest of the year. Or, if they do know, they feel no moral weight. Simply said, a sheer lack of monetary sources drives farmers to grow the poppies cultivated for cartel distribution.

“It is not the drug production that generates underdevelopment,” said Antonio Mazzitelli, the head of the United Nations Office on Drugs and Crime in Mexico. “It is the lack of development that generates the opium cultivation.”